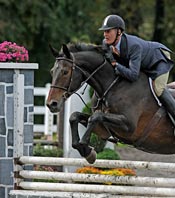 Gwyn Meadows farm was purchased in 1972 and we opened our door in 1973. I have designed a program that encourages the enjoyment of all aspects of horseback riding. From horse shows, trailrides, foxhunts, to riding trips around the world.