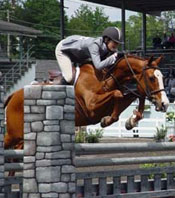 Born and raised at Gwyn Meadows. I have loved riding and being with the horses from day one. 1977 I won the lead line at the Devon horse show and have enjoyed going in the show ring ever since.