After moving his family from Wyoming, Lindley Scarlett, Richard Scarlett’s father, began selling horses all over the Philadelphia area.  When Richard was only 14 years old, he ran his own business in Wyncote.  At 16, he began offering a riding day camp.

The search for the best property to meet their needs led Richard and Trudy to Worcester. Worcester was a perfect fit and full of promise.  With horses in their blood, they longed for a place of their own close to their families who lived in Lower Gwynedd and Wyncote. They purchased their 54-acre Worcester property on Shearer Road, formerly a chicken farm, in November 1972. They had looked elsewhere but settled here because of Worcester’s open space.

They started Gwyn Meadows Farm with 50 horses in 1973.  Richard and Trudy’s dream was to provide riding lessons, board horses, and show horses. They created an environment for children to learn how to ride horses, take care of and respect the horses, run around and have fun “just being themselves.”

When they started their family, they shared their love for horses with their daughter Amy. Amy Scarlett Haskins was born and raised in Worcester on Gwyn Meadows Farm.  She shares the same love of riding as her dad. They have both won numerous awards at the Devon Horse Show and other horse shows in our area.

Something special about the farm drew Amy back to her Worcester roots from Jackson Hole, Wyoming, in 1999.  Worcester is where she wanted to raise her family. With Richard’s encouragement, Amy agreed to take over the day- to-day operations of their farm in 2001, but not without her father’s help. Richard remains very much involved in the Farm, sometimes getting up at 2 or 3 a.m. to start the day.  Together Richard and Amy have grown their unique program to suit horse lovers of all ages. They offer a summer camp program in addition to riding lessons and many special events throughout the year. Richard enjoys taking friends to paper chases, fox hunts, local trail rides, and destinations around the world on horseback. Amy enjoys teaching, working with the children, going to horse shows and spending time with horses.  She is proud to continue her parents’ legacy.

Gwyn Meadows Farm is very child friendly and family oriented.  Over the years, they have created wonderful memories for their students and themselves.  They are seeing some former students return with their own children because they had so much fun at the farm when they were young.

Today three generations of the Scarlett family share their love for horses at Gwyn Meadows Farm. Amy and her husband Chris and their two children, Addison and Brooks, live in half of the home where she was raised, while Richard lives in the other half. Pictures adorn their home, showing the pride they share from riding at the horse shows. Their family passion for horses continues. In 2012, both Addison and Brooks rode and placed in lead- line at the Devon Horse Show.

(article reprinted, in part, with permission from Friends of Worcester Fall, 2013 newsletter) 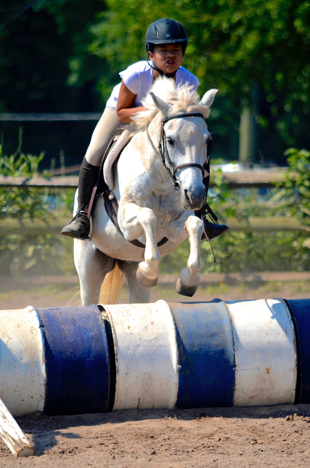